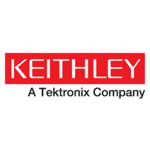 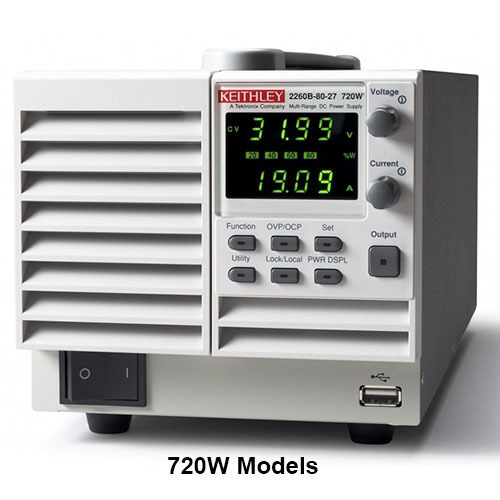 Flexible and Fast for Automated Test Systems
The Series 2260B power supplies will work in any automated system because they can interface to a controller with either a USB, LAN, or optional GPIB interface. Furthermore, the Series 2260B supplies have fast discharge capability to dissipate the voltage on the output quickly. These supplies also have a fast transient recovery time to load changes. The combination of the fast discharge time and the fast transient response helps minimize critical test time in automated test systems.

Control the Voltage or Current Rise Time to Reduce Inrush Current and Prevent Device Damage
Series 2260B power supplies have programmable rise time (or slew rate) control to prevent potentially dangerous inrush currents from flowing into loads that have low resistance when power is initially supplied. Either voltage or current rise time can be controlled. Programming a current rise time puts the Series 2260B power supplies in a constant current control priority mode in which the current slew rate limits the rate at which the voltage rises across the device under test (DUT.) In addition to controlling rise time, fall time can also be programmed; fall time values can be different from rise time values. Delivery of power to a load can be precisely controlled to prevent overshoot spikes and excessive amounts of inrush current, eliminating damage to components, modules, or devices and generating more precise characteristic I-V curves for components such as LEDs.

Emulate the Response of a Battery
Test a circuit or device under the most realistic conditions by applying a test source with the output resistance that is equivalent to the output resistance of the actual source that will be used to power the circuit or device. For example, a battery has a varying internal resistance, and a device powered by a battery will have a voltage applied to the device that is reduced by the voltage drop across the battery's internal resistance.

Create Custom Voltage Source Waveforms
An internal test sequence mode allows the Series 2260B supplies to output a set of voltage levels for varying time intervals at each level. The test sequence can be stored and used repeatedly to determine DUT performance at number of voltage levels. In addition, the analog input control can be used to create voltage profiles that simulate how a battery responds to a fast changing load current requirement such as a large inrush current. Also, generate a combined DC output level with an AC signal superimposed on it to test how a circuit responds to noise on its DC power source. The analog input control parameter can be either a voltage input or a resistance input. With this analog control capability, numerous types of DC supply signals can be generated to test circuits and devices under a wide range of circumstances.

Flexible and Fast for Automated Test Systems
With their USB, LAN, or optional GPIB interfaces, Series 2260B power supplies will work in any automated system. In addition, these power supplies have an analog control capability that can control outputs via an external voltage and resistance. Furthermore, Series 2260B power supplies feature fast discharge capability to quickly dissipate the voltage on the output. These power supplies also have a fast, 1ms transient recovery time to load changes. This combination of fast discharge time and fast transient response minimizes critical test time in automated test systems.